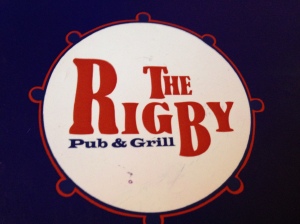 I’m a huge Beatles fan so when I heard a Beatles-themed restaurant opened downtown I had to put it on the list. The Rigby opened over a year ago, but since I hadn’t heard any good reviews on the place I didn’t put it at the top of the list. A friend and I finally decided to go for a late lunch one day and had mixed opinions. I looked at the menu and knew all of the dishes were associated with Beatles songs, so I assumed the restaurant itself would be Beatles-themed, but I was wrong. The restaurant is three levels. The first level is the bar area and it had some records and posters on the wall (not enough in my opinion but it was a good effort). The second level was very odd – it had a lot of non-Beatles decor and a mural that was supposed to represent Beatles songs, but it kind of missed the mark. The basement had a sign above the steps that labeled is ‘The Cavern Club,’ so that went with the theme but I didn’t go down there. The entire building has exposed brick and wood floors that would lend itself very well to Beatles decor and memorabilia, but I was very disappointed. The odd glass light fixtures on the second floor shaped like umbrellas were absolutely awful, and the tacky banquet tables and chairs didn’t suit the feel of the restaurant I was expecting. Moving beyond the atmosphere and decor of the restaurant, the menu was expansive and we ordered a lot of food.

As everyone knows, I’m a fried pickle fanatic so when I saw them on the menu I knew I had to order them. The menu is pretty confusing – they have a list of appetizers and then what they call ‘Righteous Additions.’ They are basically the same in concept so I have no idea why they are listed on different parts of the menu. After clarifying that the Please Pickle Me Righteous Additions basket and the And Your Curd Can Sign appetizer would be the same size, we decided to get both. The fried pickle chips were perfectly hot, crunchy, salty and not overwhelmingly battered. I like it when I can see pickle through the batter. The creamy horseradish sauce was unusual (normally fried pickles come with ranch dressing), but very good. The best thing about the pickles was the huge portion that you get – enough to take home leftovers!

For entrees they offer Beatles-themed burgers, sandwiches, wraps and salads. Most of them don’t look too exciting and if they’re as over-the-top as the Eleanor Rigby Burger I got, they probably aren’t worth ordering. The Eleanor Rigby burger comes with Wisconsin cheddar cheese, fried onion straws, a signature sauce, lettuce and tomato on top. The burger patty and bun were absolutely nothing special, and the amount of fried onion straws on top were way to overwhelming. I was really not impressed with my burger. The homemade pub chips that came with the burger were fine. 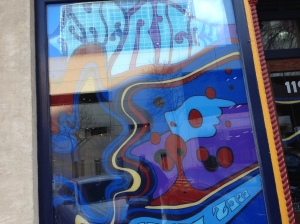 FOODNOTES: The only thing more disappointing than the burger was the lack of Beatles decor in the building and lack of Beatles music overhead (we were there about an hour and we only heard one Beatles song played the entire time). The burger I got had way too many fried onions on top and the rest of it was uninspiring. The best part of Rigby’s is their fried appetizers/righteous additions. The fried cheese curds and pickles were top notch. I would suggest avoiding the creamy buffalo sauce and trade it in for the creamy horseradish sauce when getting the fried cheese curds. The prices are a bit high but if you get just appetizers (the thing I liked the best), it wouldn’t be too bad. I wouldn’t suggest going to the Rigby for a meal, but drinks and appetizers would be a good option.