Soho has been known as one of the go-to food trucks for dumplings in Madison for years, but now that they’ve opened a storefront in Fitchburg, they’ve expanded their menu. And boy were those good additions! Of course they still serve dumplings, but if you’re going to the restaurant in Fitchburg I would suggest some of the things they don’t serve out of the cart. 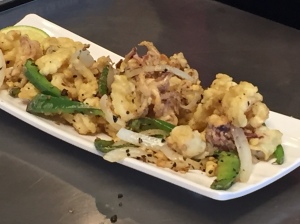 Before trying calamari at Soho with Michelle Li, I had tried it several other times and didn’t like it — both fried and sauteed. I thought the texture was terrible and the taste was worse. But Rocky at Soho really knows how to do calamari. His secret…promise you won’t tell…is cornstarch. I could eat an entire order of it by myself. The batter is salty and crispy. The calamari is tender and not fishy. And to my surprise, the pieces with the tentacles were the best ones because they were crispier. The calamari comes with a tasty dipping sauce, but it is not necessary. All you need is a little lemon juice squeezed on top and it’s time to dig in! If you don’t like calamari, do me a favor and give Soho’s a try. They will convert you. 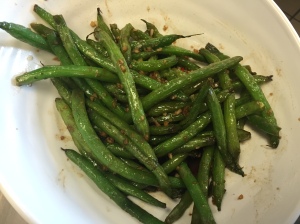 We also got to try Soho’s green beans and fried tofu. I know, you’re thinking that both of those sound boring, but trust me…they aren’t at Soho. The green beans are charred, salty and in some sort of sauce that was so good I started eating them before I even had a fork, and couldn’t stop.

Now for the tofu. Every time I try to cook tofu it ends up mushy and tasteless…so I usually avoid it. Well apparently the secret is to deep fry it…because everything is better deep fried! The tofu soaks up the sauce they use, so it’s soft and flavorful on the inside and super crispy on the outside. As a non-tofu-lover I was surprised that I just kept popping cubes of tofu into my mouth.

FOOD NOTES: Soho’s dumplings are good…there’s no question about it, but if you’re going to their store in Fitchburg instead of their food truck I really suggest giving some of their other menu items a try. I would venture to say their calamari tops most of the places in Madison and they really know how to serve up usually boring green beans and tofu with flare.