The saying ‘Location, Location Location’ is popular for a reason, but every location has to be backed up by quality product — in my opinion. Waypoint Public House in Monona definitely has the location, but the food needs a little work. The dining room and decor are the perfect mix of industrial and cozy with some local charm thrown in. I loved the mismatched chairs, different types of wood and funky decorations. The restaurant is at the end of a new apartment building on West Broadway, which is where the location factor comes in. Some people might not like it, but I think that spot is cool because you get the hustle and bustle of the Beltline and the calm and relaxing feel of the Yahara River. It was raining the day I went with a friend so we didn’t get to try out their patio, but it looks like it has the best seats in the house.

Now on to the food. We got the cheese curds and jalapeno poppers. Both of them could have been better. The cheese curds were fresh and should have been good, but they were super super greasy. I always expect cheese curds to be at least somewhat greasy because they’re fried, but these were so greasy I didn’t want to finish them. The homemade ranch was pretty stellar though.

The jalapeno poppers were not traditional poppers, and while I get what they were going for, I didn’t like them. When I order jalapeno poppers I want the crispy, fried jalapeno bites. But at Waypoint their jalapeno poppers are grilled instead of being breaded and fried. They might be healthier, but I wanted the unhealthy ones (to be fair — our waitress told us what to expect when ordering them). Besides not being breaded, the cream cheese filling didn’t have any flavor…every bite basically tasted like jalapeno. 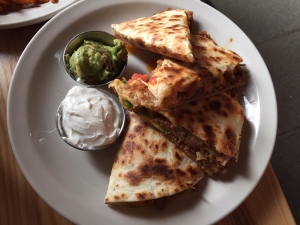 Their main menu had a lot to offer, but I couldn’t decide what to get so we asked the waitress and she suggested the pulled pork quesadilla. The quesadilla has house smoked pork, queso fresco, jalapeno, tomato, onion, sour cream and guac. The quesadilla had all the right ingredients (including a ton of tender pork) to be good, but a couple factors derailed it. 1) The smokiness of the pork overpowered all of the other ingredients so I couldn’t taste any of them. 2) It was super greasy…greasier than the cheese curds. It was so greasy the first thing I noticed when picking it up was grease dripping out of it. And 3) The guac was really bad…like out of can bad. I only ate one of the wedges, but the other three were OK the next day for cold leftovers.

FOOD NOTES: In the case of Waypoint Public House, it isn’t all about the location. They do really have the location part down, but their food leaves something to be desired. Everything was way too greasy and didn’t have great flavor. I’m not sure exactly when they opened, but I know they hadn’t been open very long when I went in August. I will probably give them a second chance, but not anytime soon.