I’ve taken a couple months off from reviewing restaurants…but after a couple of my adoring fans (bahahahaha jk!) asked if I was ever going to blog again, I figured I should get back to it.

So here’s a quick review that dates back to this summer to get the ball rolling:

I went to El Pastor on Park Street for a quick lunch with two friends over the summer and was not very pleased with any part of it, except the friends part!

First of all, the entire place smelled like a stale cigarette the second we walked in. That’s not an appetizing smell, and definitely not what I want to smell walking into a any restaurant.

Now to the food. 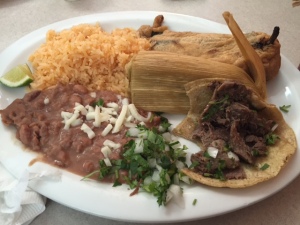 I’m a sucker for a good combo meal so I got the Sabor De Mexico with one chile relleno, one tamale, one pork taco, rice and beans, but I asked to swap out the pork taco for a lengua taco. The only way to describe the entire plate of food is bland. Nothing had any flavor and the hot sauce they put on the table tasted like watery tomatoes.

The chile relleno tasted like a boiled pepper with cheese in it…no seasoning, no grill flavor on the chile. The batter wasn’t salty or crispy. It wasn’t good. The tamale was fine, but nowhere near the best tamale I’ve ever had. The meat on the inside was tender, but again…didn’t have any flavor and the corn dough was dry. The lengua taco (yes…I like lengua tacos…at least I do at other places) was not good. The meat was stringy and didn’t have any seasoning on it at all so it tasted very gamey. I ate so little of the rice and beans I can’t even tell you what was wrong with them. Basically it was not a good plate of food.

FOOD NOTES: On top of the terrible cigarette smoke smell, the food at El Pastor was pretty bad. It wasn’t inedible, but I definitely was not happy with my lunch. My lunch dates weren’t as critical of their lunches, but I won’t be back.

I’ve posted about my quest for authentic Mexican food before, and I had almost lost hope until I had my first meal at Taqueria Guadalajara. The Mexican restaurant is a block down from the new Barriques at Park and Fish Hatch. Be careful not to drive past because it looks like a house and is between two other small buildings. You walk in to a front bar area that seats about a half dozen, then there’s the open kitchen and in the back is a dining room that probably seats about 20.

Their menu has well-known options like tacos, chimichangas, enchiladas and burritos, but it also has some interesting options like lengua (tongue), huaraches, menudo (only on Saturday and Sunday) and chile rellenos. I wasn’t sure how I’d like some of the more authentic options so I opted for a lengua taco and chicken enchiladas.

The lengua taco comes in a freshly-made corn taco with onions and cilantro…our waitress was more than happy to exclude the cilantro. My friend doesn’t like avocado so I put her avocado on my taco when it came to the table. The corn tortilla was hot and fresh. The lengua was super tender and had a perfectly seasoned flavor. It came with a small chunk of lime, which adds a great tang to the taco. The raw onions added a great flavor and crunch. I wish the taco normally came with avocado on it, but it would be worth it to add it on. I loved my tongue taco, and went back a couple weeks later for more tongue! On my second visit I got a lengua huarache, which is a flat corn tortilla covered in beans, choice of meat, green salsa, melted cheese, lettuce, tomato, avocado and sour cream. The lengua on my second trip was just as good, but the extras on top really added some great flavor and made the meal better.

For my main meal on my first visit I got chicken enchiladas. They were very tasty but nowhere near as special as the lengua taco. The shredded chicken was cooked well and was plentiful. The enchilada sauce was supposed to be a green sauce, but usually green sauce is made with cilantro so I subbed that out for red sauce, which was standard red enchilada sauce. The enchiladas come with rice and beans, which are usually throw-away sides in tex-mex restaurants, but these were great. The rice was plump and had a good flavor. The refried beans were perfectly creamy but still had lumps, and actually had some flavor…I’m not sure how but they didn’t just taste like beans.

FOOD NOTES: The restaurant itself isn’t anything impressive, but the fresh, authentic Mexican food is show stopping. The chicken enchiladas were fine, but the flavor of their rice and beans were exceptional compared to most places. Tongue sounds disgusting, but when you call it lengua and it tastes as good as it does at Taqueria Guadalajara, you can’t pass it up. They use a lot of cilantro so if you’re like me and think it tastes like soap…make sure to ask for everything without it. I definitely suggest the huarache, and would definitely be up for trying some of the other authentic menu options. If you’ve had menudo let me know what you think about the traditional Mexican stew made with beef stomach.