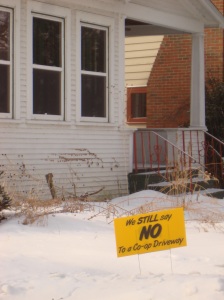 Neighbors of the Willy Street Co-op are concerned about bike and pedestrian traffic safety with the addition of a second driveway for the co-op onto Jenifer Street.

Even though the Willy Street Co-op is located outside the Schenk-Atwood-Starkweather-Yahara neighborhood, neighbors who frequently patron the co-op are concerned about the safety of bike and pedestrian traffic entering the co-op’s parking lot from Jenifer Street. With the additional driveway, opponents say bike and pedestrian traffic will have to worry about vehicle traffic exiting and entering the driveway on Jenifer Street instead of the entrance just being for bikers and pedestrians.

The Willy Street Co-op is a member-owned grocery store that sells mainly local and organic products. According to Mike Barrett, neighborhood resident and co-op member, the co-op is always busy, has the most sales per square foot than any other store in the city and many patrons walk or bike to the store.

“Businesses in this neighborhood can survive with less parking and on more biking and pedestrian customers,” said Barrett. “The co-op doesn’t understand that the neighborhood has been coming out to support them on foot.”

Opponents of the driveway, who have started an online petition to garner support for keeping the driveway temporary, are concerned that it is a “psychological and physical barrier” to the co-op for the elderly and children.

According to a letter sent by co-op member Chuck Strawser to co-op management during the summer of 2009, many members choose to go by bike or foot to avoid the congestion caused by cars and the reason so many of those pedestrians and bikers enter on Jenifer Street is because “it is so much safer for vulnerable road users to be able to approach the co-op without confronting cars being driven in and out of the co-op.”

“Look at the bike racks, even in the middle of winter they are full,” said Barrett. “People are making their way there by means other than driving.”

According to Brendon Smith, communications manager at Willy Street Co-op, members have been commenting on the chaotic parking lot for years but the decision to put the driveway in was finalized when construction was announced that would cut down traffic to one westbound lane on Williamson Street.

Putting the driveway in to supplement the main driveway during construction is not a concern of neighbors.

“On a temporary basis, during construction, we can put up with it,” said Barrett. “People are trying to be reasonable but it is the permanent opening of [the driveway] that has people up in arms.”

By making it less safe for people to bike or walk to the co-op by keeping the driveway open, those people will likely decide to drive to the co-op, thereby increasing the amount of traffic congestion, according to Strawser’s letter.

The block of Williamson Street the Willy Street Co-op is located on was rated the location with the third highest amount of non-intersection crashes in Madison, according to the 2009 City of Madison Crash Report.

The car accidents and near misses are partly because of the high volume of cars but also because there is only one way in and one way out of the parking lot, according to Smith.

To ease overcrowding issues in the parking lot the co-op has implemented online shopping, biking incentives, posting signs asking patrons not to make left turns onto Williamson Street and opening a second location.

“Our overall goal is to have less congestion in the parking lot and increase the safety around the co-op,” said Smith.

During construction the Jenifer Street driveway will be an entrance and an exit but after construction it will be a right-turn only exit.

“If the driveway is determined unsafe after construction, then we would have to…put the gate back and leave it as a bike entrance,” said Smith. “We hope there would be less or even zero accidents” with the Jenifer Street exit but we will be evaluating the uses and safety of the driveway periodically.

The co-op started an ad hoc committee of members and neighbors to address member concerns and offer suggestions regarding the safety of the co-op parking lot.

“[The committee} was created to help set criteria for judging the driveway effectiveness and to give us some ideas about how to address concerns,” said Smith.

According to Lindsey Lee, who used to be a member of the committee, the purpose of the committee was never very clear and there are other, more important issues concerning the upcoming construction than the co-op’s driveway.

“There are more issues regarding the upcoming road construction than the driveway,” said Lee. “There are a lot of small businesses that might not survive that construction, which would be really bad for Willy Street overall.”

The committee has no official decision-making power but will be handing down a recommendation about the driveway’s effectiveness after construction that co-op management can either accept or reject, according to the co-op’s website.

According to Barrett, the co-op has the freedom to do what they want, “it’s all a matter of whether [the co-op] has institutional and managerial self-control to do the right thing by the neighborhood.”